A huge thank you to Damien VK7SD and Alan VK7KAD who were our fantastic hosts for the tour. Both Damien and Alan are technical support staff at the ABC and welcomed and showed us around.

We started in the live music recording studio which was being upgraded and then moved to radio studio 703 and were shown the control surfaces and control screens that make up an ABC radio studio. Everything is configurable and can be personalised for any presenter in the studio. Next door the ABC Radio Hobart presenter and producers were busy with the evening program.

Our next stop was Radio Master Control where all things audio and radio are routed through. Channels from studios, satellite streams, national links and many other sources all come into this room. This area schedules and controls all radio links and switching and it can be done from anywhere in Australia!

Then past the large news room where journalists were putting together material for the many feeds and sources on ABC Radio, TV and Online. Into the TV studio control room where the group was taken through the production, scheduling and running of the 1900 news broadcast by Damien and Alan. Whilst the news is live to air there is only a director and producer controlling the sequencing of news stories and there is a new reader and weather presenter in the actual studio. We then moved into the news studio and Damien and Alan took us through what would normally happen during the news broadcast with autocues, lighting, automatic camera positioning and the chroma-key weather map.

We then went out into the workshops and garage where there are some impressive vehicles for satellite linking, outside broadcast (OB) linking via Mt Wellington and down to the studios and for OB. 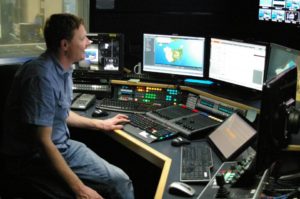 We slipped into TV master control area where all the mixing, scheduling and quality control is performed for TV transmissions. Across the corridor and into the large data centre that holds many many racks of both TV and radio equipment that provides all the functionality for radio and television production, editing and transmission. It is not surprising but most of the equipment in these racks are digital switches and digital processors and very little undigitised actual audio or TV signals passes through this area. Everything runs over the IP network or SDI network for video streams. Everything is on dual power supplies which are connected to Uninterruptible Power Supplies and a diesel generator to keep everything running.

With the tour complete everyone showed their appreciation and thanks of Damien and Alan for their time and the effort.