From the Listener In, 14th March,1925, Wireless Club Reports:

“The Hobart Radio Experimenters’ Club is a strong body of wireless enthusiasts . . . The club was once known as the Wireless Institute, but a split occurred (in the course of which some blood was spilt and a black eye told its tale), and the new body was formed with the donor of the black eye as president. The Wireless Institute is still in existence, but in a rather negative state at the moment. . “

Anno domini 2004: The Wireless Institute in Tasmania is no more – this is some of what happened.

Wireless experimenters were busy in Tasmania before the First World War, 11 stations being listed in 1911. A.H.Medhurst (later 7AH) and W.P.Hallam contacted visiting warships in 1901. Geoff Hall (later 7GH) said his best DX using a spark transmitter and coherer receiver was only 200 yards! The Marconi company built a station at Devonport in 1906 to demonstrate communication with Victoria. Father Shaw, the “wireless priest” erected a station on King Island in 1911. The coast radio station, VIH, was built in Hobart in 1912.

A Wireless and Electrical Club was formed in Hobart after the First World War. Later, after a visit to Hobart by H.R.Gregory, who was involved with the Wireless Institute of Australia in Sydney, theTasmanian Division of the WIA was formed at a meeting in Hobart on the 21st February, 1923. The Launceston Wireless Club was granted affiliation in October, 1923.

The Hobart club started boldly with its own rooms in Trafalgar Place. However, following an unsatisfactory demonstration of wireless at Hobart’s “Palais de Danse”, which was probably due to a lack of knowledge of public address, there was dissension amongst the members. Later demonstrations held in a hall where the audience was quiet and not attempting to dance, were successful, Sydney broadcasting stations being received.

The WIA meeting voted to not send a report of the proceedings to the press, but next week the Tasmanian Mail on it’s Radio page headlined – “Stormy Scene at First Annual Meeting”. In April 1925, the Tasmanian Mail commented that the attempts to establish a radio club had been “a laughable failure” with “ceaseless and childish bickering”.

So the Wireless Institute headquarters moved to the affiliated Launceston club and was officially incorporated in 1925. In Hobart, the Radio Experimenters Club completed their first year “with harmony their motto”.

In 1926 the Queen’s Domain Coast Wireless Station was upgraded to valve equipment.

By 1930 the Division’s meetings were being held in Hobart where the majority of the council members lived. In 1931 a news bulletin and QSL bureau started.

During the early 1930s there was much activity in Hobart with field days and dinners. In photographs of the time the WIA blazers were popular. There were other radio clubs active during the 1930s, notably the Devonport Radio Club and Army Signals Radio Club. The Hobart Radio Research Club was disbanded following the reactivation of the WIA in Hobart. Club callsigns listed in 1929-36 included 7HR, Hobart Radio Research Club; 7PR, Launceston Technical College; 7SR, Army Signals Radio Club and 7WI the Divisional station.

By 1937 activity was at a low ebb and the committee noted an “unsatisfactory financial state . . . liabilities exceed bank balance”. In 1938 they noted a “downward trend of Institute affairs and lack of cooperation by members” and proposed a reorganisation of the Tasmanian Division. Later that year they visited Launceston and northern members to discuss the latter’s dissatisfaction.

However at the next AGM in 1938, when the bank balance was 1-19-3 and the debts 14-10-7 with 16-3-6 in outstanding subscriptions: “Doug Fisher, 7AB, surprised the meeting by offering Northern members resolutions – that the headquarters should be in Launceston and that the Northern members were dissatisfied … the meeting was out of order and the president could not gain control … in view of Mr Fishers caustic remarks … it was agreed to call a special general meeting to discuss HQ location”

Unsurprisingly, the special meeting held in Hobart resolved that the headquarters remain there. However this kerfuffle led to the formation of the Northern Zone of the WIA in Launceston in 1939, where Col Wright, VK7LZ, was the main organiser.

During WW2, with many members absent and transmitting prohibited, there were no meetings held. After the war there was an enthusiastic reforming of the club which soon had more than 100 members.

The Northern Zone of the Division was reformed in Launceston in 1948 and the Northwestern Zone formed about 1950.

However during the 1960s there were further rumblings from the North regarding their neglect and in 1973, when activity in Hobart was slack, the Tasmanian Division was reorganised, based in Launceston, as a statewide body overseeing branches in the North, Northwest and South. This most satisfactory arrangement continued until the final demise of the Tasmanian Division in October 2004 following the formation of a National WIA. 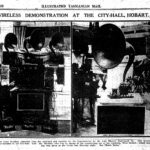 Newspaper article from November 29 1923, Depicting a demonstration of wireless at City Hall 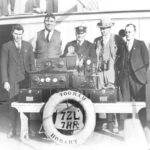 7DX & 7LJ on the Marine Board vessel Toorah to broadcast descriptions of the Hobart Regatta in 1929. 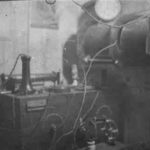 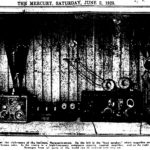 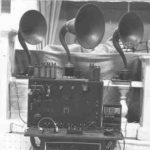 Some of the equipment used at the Palais de Dance in late 1923, where the WIA demonstrated music by wireless. 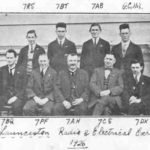 Some of the amateurs at an exhibition in Launceston. 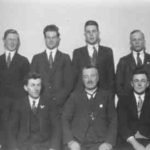 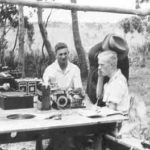 Mr Masters, VK7MM and Chas Harrisson, VK7CH, share a pair of headphones at a Field Day in 1930. The wind up gramophone was used as an automatic Morse sender. 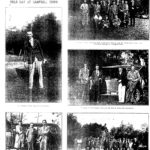 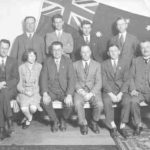 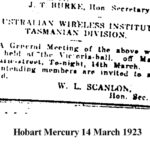 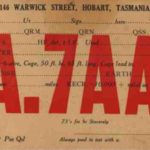 Trevor obtained the call 7AA in 1922. When international communication became possible, it became necessary to add letters to identify the countries, hence the “A” for Australia. 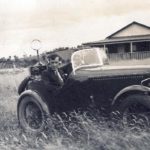 Bill Nicholas, VK7WR, won the hidden transmitter hunt at the Field Day in Hobart in 1935. 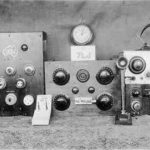 By 1930, the style of the equipment had changed, as shown by another photo from 7LJ. 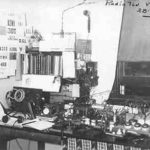 Lon Jensen, 7LJ, Devonport, 1926. Lon was a schoolteacher who encouraged many others to take up amateur radio. 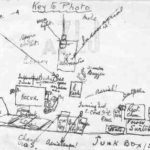 Lon Jenson’s 7LJ, hand drawn illustration depicting the items in his 1926 Shack, as seen in the previous photo 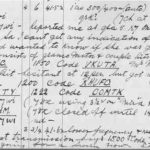 Here is a fragment of the log of VK7DX when he was in contact with portable station XVK7WI at the field day. 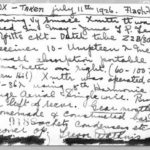 Trevor’s note from the back his previous Shack Photo 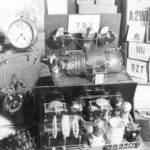 When the PMG required the call 7AA, Trevor changed to 7DX. This shows the equipment he used in 1926. 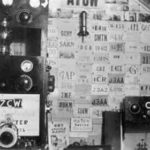 Crosby Walch, 7CW, was in Hobart. Note that the prefix for Australia has changed to “OA”. 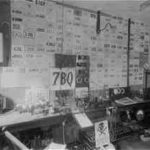 Len Crooks, 7BQ, was a leading amateur in Launceston. 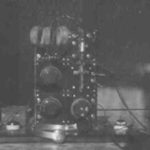 Before broadcast licences were available, everybody was an experimenter. This receiver belonged to Jesse Slater, 7AU, in Sheffield.

Acknowledgements:
Photos are from the collections of Trevor Watkins and Chris Long.