ATV = Amateur TeleVision is the transmission of normal fast-scan television signals within the frequency spectrum allocated to amateur radio. In Australia it is the PAL standard for analogue TV.

DATV = Digital Amateur Television and in Australia it is the same as your normal Digital TV signal (DVB-T) however it is on slight different frequency of 445.5MHz. There is also the DVB-S (Satellite) used within the amateur radio community.

This is a standard DVB-T digital TV signal which can be received using a Set-Top Box, Digital TV or DVB-T USB Dongle.

Take a look at VK3RTV for a list of the STBs that work on this frequency. 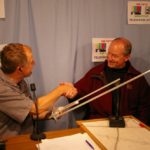 Warren VK7FEET our 100th subscriber to the VK7 Regional News Broadcast receiving his prize of a 2m/70cm Jpole. 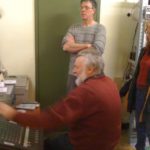 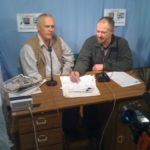 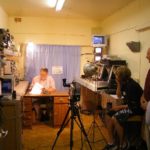 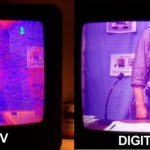 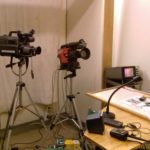 Cameras Looking at the Studio Desk 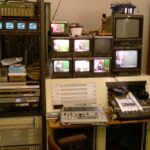 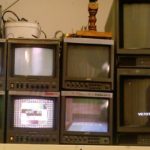 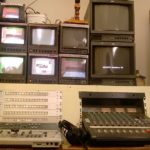 Close-up of the titling preview and then composite when combined with other studio images. 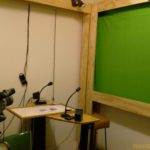 New Studio Arrangement with Cyclorama and Desk (Thanks to Paul VK7FPAH) with Chroma-Key Screen (Thanks to IKEA!) 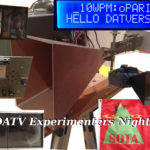 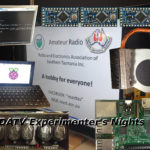 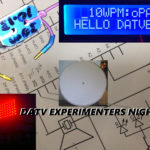 The first broadcast from the new DATV Studio occurred on 15 May 2019.

Live stream can be viewed at: https://www.reast.asn.au/news-events/live-stream/

Recordings of each live stream can be found on REAST YouTube Channel.

You will need a UHF TV antenna with some gain pointed toward the top of the Queen’s Domain to receive the DATV signals. These signals have a much lower power than the commercial TV stations on Mt Wellington.

For digital reception you will need the antenna connect to a Digital TV receiver (set-top box, DTV USB Dongle or built in). You will need to manually tune 445.5MHz as this is not a standard channel number and most set-top boxes and TVs automatically skip this frequency.

A good article on receiving DATV signals can be found on the VK3RTV website.

Broadcasts get underway around 7:30pm with an introduction video then head into our program for the night soon after this.

Programs can consist of any combination of:

Take a listen to the Sunday morning VK7 Amateur Radio broadcast for information on what is going to be on at the Wednesday night DATV night or take a look at our Facebook page – reasttas.

We have over 200 presentations on DVD in our extensive DATV library.

These are available to REAST members for short-term loan.