The radio frequency spectrum is an international natural resource. It is recognized internationally and regulated by the International Telecommunication Union (ITU) established by the United Nations. The International Amateur Radio Union (IARU) is charged with being the co-ordinating body for all Amateur (or Ham) Radio interests and spectrum. The Australian member of the IARU is the Wireless Institute of Australia (WIA) who acts as the voice for the amateur interests.

There are approximately 3 million radio amateurs worldwide, 14,500 in Australia and 600 in Tasmania.

What do radio amateurs “hams” do?

Ham’s lead the way with the use voice over IP (VoIP) technology over the internet to link repeaters all over the world. Our modes and techniques in relation to satellite communication, meteor-scatter, tropo-scatter, earth-moon-earth (Moon Bounce – EME), spread-spectrum, fast-scan & slow-scan television, high speed packet radio and regularly talking (not emailing or phoning) people all over the world on a regular basis. Australian amateurs are credited with the development of some of the first successful communications satellites ever launched. There is even a ham station on the International Space Station.  This is hardly out dated technology!

Radio amateurs encourage the use of broadband

Radio amateurs encourage the use and roll-out of broadband. Hams through the technology they utilise are heavy users of broadband. What Hams are against is the interference causing potential of BPL technology.

Radio amateurs do not cause interference

Radio amateurs have to operate their equipment within strict limits imposed by the Australian Communications and Media Authority.

We also need to conform to compulsory electromagnetic radiation (EMR) guidelines and we can be audited at any time by the Australian Communications and Media Authority (ACMA) as to compliance with these standards.

Radio amateurs carefully match their transmitter to the antenna being used therefore minimising the potential for interference caused by impedance mismatching. If interference does result then radio amateurs take very seriously the resolution of interference complaints with the assistance of the ACMA where necessary.

BPL and BPL operators were not subject to EMR/EMC exposure limit or operational compliance.

Radio amateurs – “hams” are licensed users of certain parts of the radio spectrum. We have to pass up to three examinations that are regulated by the ACMA and delivered by the WIA to prove we are competent to operate radio equipment in the allocated radio frequency spectrum and within the strict electromagnetic radiation standards.

Part of the spectrum that we are licensed to operate in is the high frequency (HF 3-30MHz) spectrum that affords long-distance communications, across the world. It is this spectrum that current BPL technology uses.

As a group, amateurs only use portions of the spectrum, and as individuals we use just sections of those portions, at any one time. Whereas, one BPL location uses all of the HF spectrum and leaves no room for any other user.

BPL systems are an array of radio transceivers using the powerlines as the transmission medium. These powerlines act in some instances as large antennas with dynamically varying characteristics due to power factor correction and changing power network configuration.

BPL operators are not a licensed user of the HF spectrum and yet the technology they are deploying has the potential to cause interference across the whole HF part of the radio frequency spectrum.

Who else uses the HF Spectrum:

BPL (Broadband over Power Lines) or PLT (Power Line Telecommunications) is a technology to enable the delivery of high speed data service over the power distribution system.

This technology injects high power, high frequency (typically between 2 and 80MHz) signals over the power distribution network to deliver high speed data services to homes and businesses. This type of BPL is termed “Access BPL”. There is also “in-house BPL” which uses building wiring to distribute data service throughout a building. These systems are currently incompatible.

What is the Issue?

The issue is that there is a high potential for interference to the high frequency spectrum through the use of this technique. It has been described as “spectrum pollution”. This is mainly due to the power distribution network not being an efficient and effective medium for the transmission of high frequency data services.

It creates interference to such a level that a HF spectrum user within the trial area cannot hear or transmit a signal. Due to the nature of the high frequency spectrum and its ability to propagate long distances, this interference can propagate around the world.

This causes great concern about this technology not only now but into the future when the sun-spot cycle improves propagation. The technology is also prone to interference from other transmitters in the area.

Even the ACMA in their original Access BPL Guidelines admitted:

“Use of the electricity supply network to convey BPL signals will result in the leakage of radiofrequency emissions. This leakage has potential to cause interference to radiocommunications services.”

Each time a radio amateur operates, he or she listens first to ensure that their transmission will not interfere with an existing communication path. With the presence of BPL, the amateur is prevented from hearing as to whether another communication already exists or not. Thus he or she is prevented from transmitting anything at all, as well as hearing any reply that may have been possible

For more information take a look at:

Access BPL systems cause interference to radiocommunications services, this is a demonstrable fact:

Access BPL systems are intended to be “always on”. Thus:

(WIA Submission to the ACMA on the Management of BPL Interference p.11)

BPL is not an efficient technology

Inductive and capacitive injection of radio frequency on to powerlines originally designed to carry power is a very inefficient process and this means that the signal needs to be injected with high power and boosted every 3-4 power poles and this makes the technology more expensive than other competing technologies.

This also means there is a radio frequency transmitter every 3-4 poles that boosts the signal. This also means it is not a cost effective technology in rural areas and relies on densely populated areas (the suburbs) to get any appreciable return on investment.

BPL is an expensive technology to deploy

The following table provides an indication of the relativities between different broadband technology costs:

The State of New Jersey white paper includes additional information from the Shpigler Group report on the deployment cost of competing access technologies:

Where is and has it been trialed?

An amateur station located in the trial precinct would not be safely able to transmit at all on the 7MHz band because of the high risk of interference to possibly active stations that would not be heard through the BPL interference, effectively curtailing all activity on the band by such a station.

An amateur radio station located in a residential environment where a similar BPL system was deployed would not be safely able to transmit at all on the 3.6MHz and 21MHz bands because of the high risk of interference to possibly active stations that would not be heard through the BPL interference, effectively curtailing all activity on the band by such a station.

Who is trailing it in Tasmania?

The first trial occurred in April/May 2004. It  provided broadband internet to 4 houses (23-29 Kirksway Place and the 1st and 2nd floors of the Aurora office building in 21 Kirksway Place, 7 users all up. Mitsubishi engineers from Japan installed the equipment. 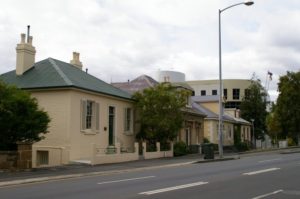 The four houses and Aurora Building behind

More comprehensive report was available from the WIA website.

The second trial commenced on August 29, 2005. The trial will cover 500 homes in Mt Nelson/Tolmans Hill, Burnie and Hobart areas. The trial will run for 9-12 months and the success of the trial will apparently depend on the number of subscribers to the Tastel BPL service.

Aurora Energy abandoned its second trial on 27 November 2007 citing it was not commercially viable in the current telecommunications climate. 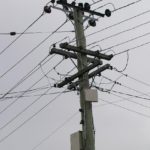 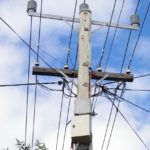 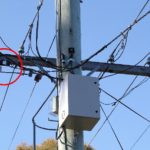 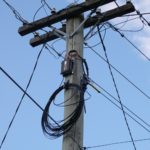 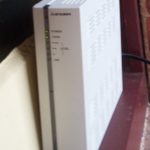 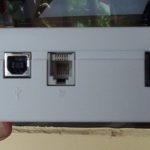 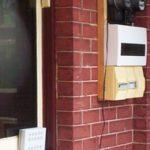 Are you experiencing interference?

If you believe you are being affected by BPL interference we suggest you contact the WIA BPL Interference Advisory Service.