We had a great roll up to our forum with many people coming along with show and tell.

Notable there was a large 1.8m AZ/EL dish that was trailer mounted that Richard VK7ZBX brought along – more on that later.

The night was all about sharing people’s experiences. We started with Rex VK7MO who took us on a picture journey of his adventures in dish mounts starting with 1296 and working through each iteration of the mounts and heading into the 10 & 24GHz telescope mounts with milling machine table used for accurate azimuth adjustment. Rex’s show and tell included the azimuth and elevation measuring devices. Thanks Rex.

Scott VK7LXX then showed his progress on his open source design SatNOGs az-el mount – all parts are 3D printed and mounted into the very nice T-Slot frame with stepper motor driving the printed worm gears.

Scott showed his 70cm M2 crossed yagi antenna that will mount on the boom. The electronics include an arduino controller, H-bridge and driver. Thanks Scott.

Murray VK7ZMS and Richard VK7ZBX then showed a presentation of the evolution of the 1.8m az-el mount and showed the development of the mount. When they got to the linear actuator mounting they employed a wonderful empirical method of cardboard and pins to design the geometry for the actuator. 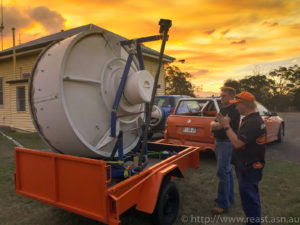 The azimuth control is a rolled ring welded to the Toyota Prado hub and this is a work in progress. We then went out to the trailer mounted dish for a demonstration of elevation actuator. It will be driven by an Arduino and VK5DJ controller. Thanks Murray and Richard.

Justin VK7TW then showed his novel Az-El mount presentation that was originally presented at Gippstech in 2015. This mount uses parts from a washing machine, a band printer and WWII radar unit. Justin then showed pictures of the his backyard 1.2m Az/El dish mount and went through in pictures and description the drive mechanism and elevations mechanism.

Kim VK7KB took the audience through 4WD hub mounting for azimuth control and the satellite control systems that are used on the Aurora Australis for tracking whilst they are moving. Thanks Kim.

Thanks to all involved it was an inspirational night to see so much creativity at play.

The video taken from the presentation is now available on youtube as seen below: