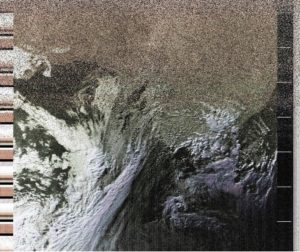 There is not much more fascinating than getting pictures from space.  And with a but of smarts and some cheap bits and pieces it’s possible to do this quite easily.

One of the display pieces at REAST’s stand at this years Festival of Bright Ideas was a display showing how to receive weather satellite photos using some fairly easily obtainable bits and pieces – a computer with a ‘USB TV Dongle’ as the now classic Software Defined Radio, a simple but impressive looking Quadrafilar Helical Antenna, and software freely downloadable from the Internet.

The antenna is built out of PVC electrical conduit and a few fittings, some 75mm PVC storm drain, and some old co-ax cable left over from an old TV installation.  Some cutting and drilling, PVC glue and a couple of lazy hours on a Saturday afternoon and its done.

The software was a current version of Ubuntu Linux and the latest copy of GQRX fresh from the authors repository, with a little gentle post-processing using WxToImg to produce the ‘false colour’ images.  I used the ‘gpredict’ program to track and display the various satellites passing overhead and on the day it went down quite well.

Now those more experienced reader may be wondering how we could do this in front of a series of classes when the satellites don’t actually pop up to order.  I admit it – there was a bit of ‘smoke and mirrors’ but this was a but cooler than you may expect.  Unlike back in the old days when you could at best record the passing audio and play it back later, one of the nice features of software defined radio is that you can record sections of the RF spectrum for later playback.  Now in this instance that comes down to a block of RF that was eating up disk space at a gigabyte a minute.  This is manageable for a 15 minute satellite pass -but you would not want to leave it running overnight.

The picture below shows the antenna on the Queens Domain, and you can just see the ‘TV Dongle’ wrapped in bubblewrap behind the antenna.  There is a 10m USB extension lead going to the back of the car (it was raining) where I used GQRX to record the pass of NOAA-18

Using GQRX at the Festival to ‘play back’ this in real time you could see the APT picture transfer coming down from the satellite and the signal getting stronger as it came up over the horizon. 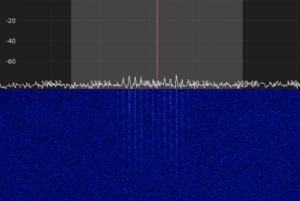 Beginning of signal as NOAAA-18 rises up above the horizon

As the pass continues until the satellite is almost overhead you can see the doppler shift in how the lines in the waterfall lean to the left as the frequency of the transmission drops as it approaches. 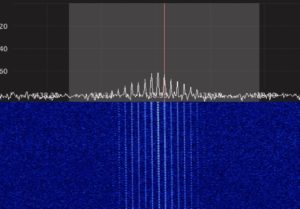 Signal as NOAA-18 is directly overhead (note ‘lean’ on waterfall)

There were other ‘artifacts’ in the signal – there was an accompanying high- resolution picture transfer that has a classic digital sound but I have not yet worked out how to decode it. 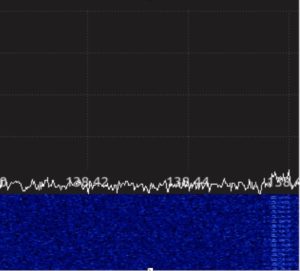 There are several working satellites orbiting and downloading analog images in the 137MHz band.  Building an antenna and putting the bits and pieces together to predict, receive and decode the images is a bit of fun.

So if you’ve a spare couple of hours and the right bits and pieces it’s a lot easier than you may think to do this.  If you are an ‘old hand’ at this – try again and have a closer look into the things that you can do with a “USB TV Dongle” and free software from the Internet.