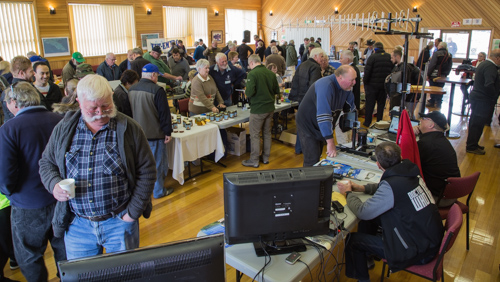 Note: This article has been republished from VK7 Regional News

It was the biennial VK7 (Tasmanian) Hamfest last Saturday at Miena in the Central Highlands – no not a bovine festival but our central gathering of amateur radio enthusiasts.

We had over 150 people roll up to the Great Lake Community Centre which is a fantastic facility.

A huge thank you to:

Thank you to our traders:

We also had information stands from:

And our preloved equipment stands:

Linda VK7QP on the ALARA Stand let me know that ALARA has three new members and lots of ALARA merchandise was sold, so it was a really good day. I also understand that we have NBNCo Lalla very interested in doing the next Foundation Licence course as well.

A huge thank you to all our volunteers in the kitchen who again excelled and provided wonderful food the whole day.

A huge thank you to Dave VK7OB and his helpers for a huge day for a fantastic day out in the Central Highlands of Tasmania.