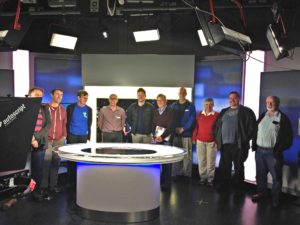 Thursday night saw a good group at the front door of the ABC next to the Railway Roundabout and we were welcomed by Damien VK7SD and Alan VK7KAD who were our fantastic and very knowable hosts for the night.

We started in one of the radio studios with producer Dave who took the group through the preparation of radio segments using the various tools that are used to edit and queue radio promotional segments around Australia. Thanks Dave.

Our next stop was Radio master Control where the staff member in that area took us through the the control of all the radio channels from studios, satellite streams, national links and other sources. This area schedules and controls all radio links and switching.

We then went into one of the radio studios and Damien and Alan took us through the various control surfaces and sources switching that is available to presenters and producers on the various ABC radio channels.

Across the corridor and into the large data centre that holds many many racks of both TV and radio equipment that provides all the functionality for radio and television production, editing and transmission.

In the TV master control studio where all the mixing and scheduling is performed for TV transmissions. Then into the TV studio control room where the group was taken through the production, scheduling and running of the 1900 news broadcast by the director. We then moved into the actual news studio and Damien, Alan and the director took us through what would normally happen during the news broadcast.

That completed the tour and everyone showed their appreciation of Damien and Alan time and the effort that went into the tour.

A huge thank you to Damien and Alan and the other ABC staff that gave their time to talk with the group.